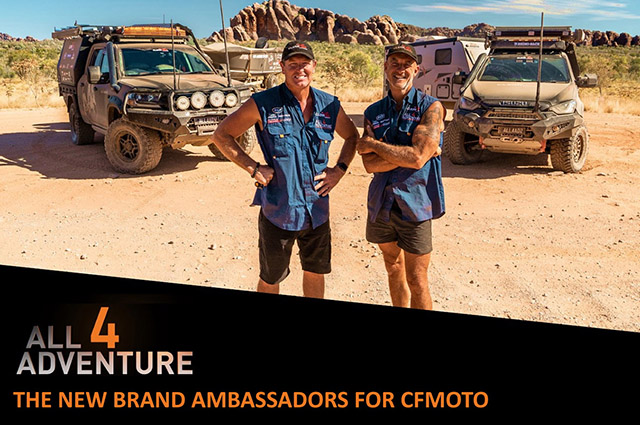 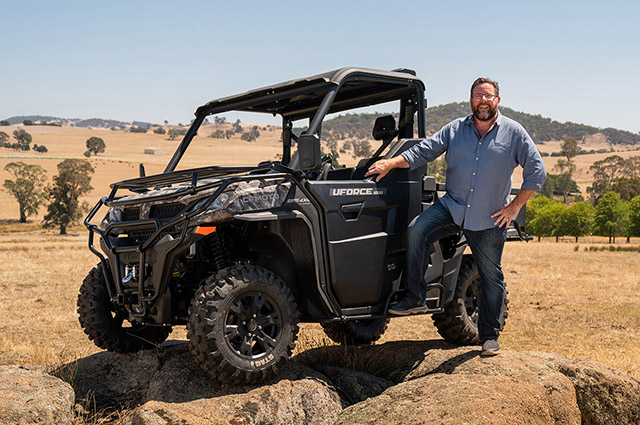 CFMOTO TO PARTNER WITH ALL 4 ADVENTURE

CFMOTO Australia is about to embark on some rugged off-road expeditions – all thanks to the team at All 4 Adventure!

The 14th season of Australia's No. 1 adventure, fishing and 4x4 show will see the two hosts – Jase and Simon – continue to explore some of the most remote parts of the country with CFMOTO joining them on every step of the journey.

For the Far North Queensland leg of the series, the UFORCE 1000 EPS Hunt – the most value-packed UTV in the CFMOTO family – will be joining the All 4 Adventure team, and the second block of production will see the baton pass to the all-new ZFORCE 800 Trail – as well as adding a more 'recreational' element into the equation.

However, it won't only be Jase and Simon enjoying the charms of the UFORCE 1000 EPS Hunt, as All 4 Adventure will also be giving one away in the show's annual 'Live the All 4 Adventure Dream' competition.

"When the opportunity presented to find another partner for All 4 Adventure in the UTV and SSV space, CFMOTO came immediately to mind," said Jase, the All 4 Adventure host.

"The marque is, quite simply, a powerhouse in ATV and UTV markets across the globe, and it's been on our radar for a long time now.

"We know the UFORCE 1000 EPS Hunt won't shirk any issue – and rest assured we'll ask it to take on some challenging carrying and towing assignments – and we're also looking forward to ramping up the fun quotient with the corner-carving exploits of the shorter-wheelbase ZFORCE 800 Trail.

"We can't wait for production to start and showcase CFMOTO in some of the most beautiful and isolated parts of Australia."

The 14th season of All 4 Adventure will go to air on Channel 10 in the second half of 2022 across metro and regional markets (schedule still to be announced), while episodes will also be distributed on DVD, Tenplay.com.au and the subscription-based Unleashed.tv.

CFMOTO Australia director, Michael Poynton, is delighted to be partnering with All 4 Adventure.

"Jase and Simon undoubtedly have the magic touch when it comes to showcasing some of the most beautiful and extreme parts of our country," said Poynton.

"And, to do that, they've got to put in the hard yards – and that's where CFMOTO comes into the equation.

"Our UFORCE 1000 EPS Hunt is not only a master blaster with its big V-twin engine, but with extra layers of protection, black half doors, a powerful winch and more carrying capacity, its remit is huge and the perfect companion for Jase and Simon's 'try anything' philosophy. And it looks the part in that camo wrap.

"And the 800 Trail has all the features to make a huge impression on the recreational SSV market, with an accessible price point as well. Jase and Simon won't want to give that one back!

"I'm looking forward to what should be another superb series of All 4 Adventure."