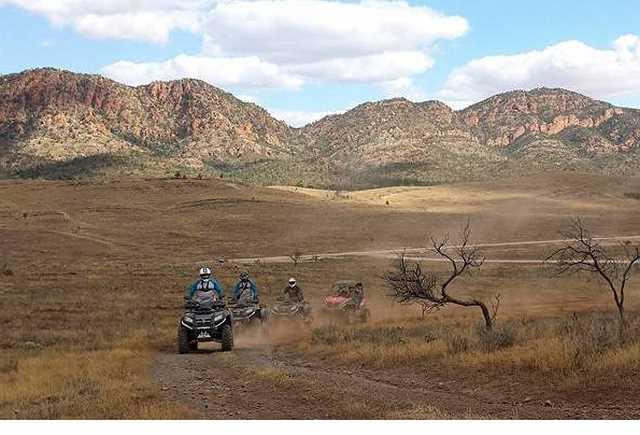 FRENCH GET DIRTY ON AUSSIE ADVENTURE

After an 11 day whirlwind tour of the Australian outback on a range of CFMoto ATV and SSV vehicles,  CFMoto France’s team of off-road enthusiasts returned home last week. The spectacular footage captured by the film crew feature the Australian outback at its finest with red dirt, blue skies, golden sand and a plethora of native flora and fauna.

The French team dubbed their journey ‘The Red Track’ and tell their incredible story through stunning imagery, film and by keeping journals. CFMoto Australia has put a selection of their words and images to share.

February 28 , The journey begins
After leaving Adelaide, the crew head to Arden Hills where they get to try out the ATV’s for the first time,  taste the local cuisine and salivate over the impressive landscape calling it ‘a hikers dream.’

March 1- Willow Springs Station
Located near the huge crater of Wilpena Pound, the team passes through quiet country towns and head off for some freestyle riding. In the afternoon, they find themselves on top of the highlands are happy to see so many kangaroos joined them on their hike.

March 2 – Rawnsley Park Station
For day three, the weather remains perfect and the team head to corner of the earth where eagles reign supreme and Emu’s run away as soon as they hear the sound of the CFMoto’s powerful engines.

March 3 – Bendelby Ranges
The team arrive in sheep farming country and the owners of the station welcome their guests with open arms. The crew describes an incredible feeling of freedom in their vast surrounds and after a hard days riding and testing the strength and durability of the X8 and SSV vehicles, they retire for the night after the most magnificent sunset and a traditional Aussie BBQ dinner of lamb and kangaroo.

March 4 – Bendelby Ranges to Broken Hill
Still fighting off jet lag from their long flights from Europe, Russia and China, the crew head to Broken Hills by truck as the ATV’s are not legally permitted to drive on the roads in Australia. After 400kms, they arrive in Broken Hill.

March 5 – Mundi Mundi Station
The team finally hit the red dirt Australia is famous for. The drones which film the adventure from above are released, and the crew play football amongst snakes, lizards and other dangerous animals which can only be found in Australia. The Kangaroos linger beside the vehicles curiously and the heat rises quickly.

March 6 – Wentworth
Another day travelling by truck, this time to Wentworth. Stopping for lunch, the crew head down to a river which is filled with crocodiles  and consider themselves lucky not to be their lunch. After a quick ride, the drone plane crashes and the rest of the afternoon is spent repairing the machine. Thankfully no one is hurt.

March 7 – Kapana
Another adventure filled day on a sheep farm station. Being further south, the scenery is greener and the crew are treated to a ride featuring swamps, rivers and conditions the CFMoto machines thrive in.

March 8 – Scorpion Park, Pinnaroo
From swamps and quagmires, the vehicles arrive at Scorpion Park and are put through their paces on sand. The SSV’s come alive, sliding, climbing and dipping with the landscape. The crew dodge scorpions in the sand and marvel at how well the vehicles handle the terrain.

March 9 - Coorong National Park
The Go Pro’s come out after the Drone crashes again and the scenery captured is breathtaking. The owner of a nearby farm invites the crew to help him round up his cattle with the CFMoto ATV’s. CFMoto Australia sells most of their ATV’s to the agriculture sector and work like this is what the machines are made for. After another day of fantastic scenery, quality riding, great food and company, the team retire for the last night.

March 10 – Kingston Beach
On the final day, the team begin riding at dawn. Kingston beach is the top spot in Australia for 4x4 driving and the CFMoto machines handle the sand dunes with ease. After a memorable ride, the crew close the day with a game of lawn bowls and pack their bags. Tomorrow they return home.

Summary:
After 11 days riding and testing the vehicles at some of the most desolate locations on earth, CFMoto proves their machines are built for performance and easily handle the harsh conditions of the Australian outback. The Red Track adventure took the French, Russian and Chinese crew on an amazing tour across regional South Australia, NSW and Victoria and the machines didn’t disappoint.